The permanent exhibition to the "Galerie de Crécy" 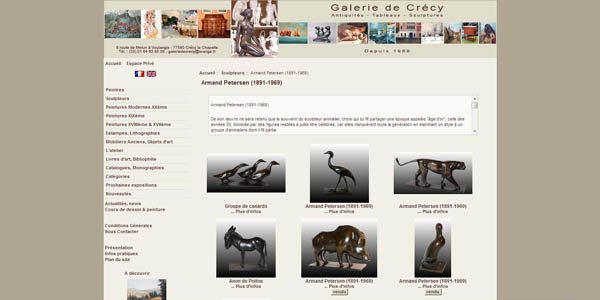 See the permanent exhibition of Armand Petersen to the "Galerie de Crécy" http://www.galerie-de-crecy.com/index.php?main_page=index&cPath=2_200

Etienne Audfray, sculptor, was born on March 10th, 1922, in Combrée (Maine-et-Loire). It has a grandfather and an uncle painters whose names appear today in Bénézit.

His Father, organist, it inherits the taste beautiful, the direction of the harmonious form. With precise graphics of the cartography (its first trade), which encloses it in static stresses and cold, he prefers the spontaneousness of young Article Très he devotes himself to the sculpture. He will be the pupil of Pétersen, Séverec, Joachim, of the Masters who will be able to stimulate his undeniable talent.

Join us on social networks ...

Also find all the news around Armand Petersen on the social networks.